TRANSPOESIE - a summary of events 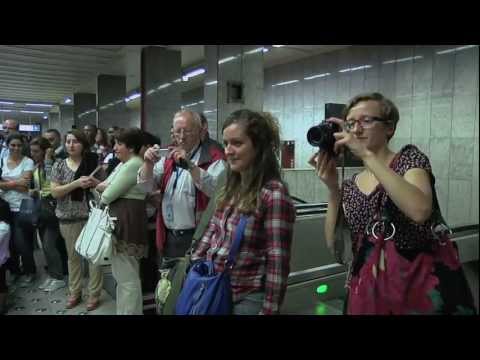 TRANSPOESIE - a summary of events”

The TRANSPOESIE project was successfully launched and caught the eye of many enthused travellers.

On 26th and 27th September 2011, on the occasion of the European Day of Languages, EUNIC in Brussels successfully launched the first edition of the TRANSPOESIE project with a series of events, including a flash mob dance, a panel discussion a poetry reading and a poetry award ceremony, organised with the support of several partners including all EUNIC in Brussels member institutes, the STIB/MIVB, FMDB and the International House of Literature Passa Porta.

From 22nd September to 19th October, 21 poems from 21 European countries were displayed in the Brussels metro system, bringing culture and poetry into the day-to-day commute of thousands of daily commuters.

On September 26th  Flash Mob Dance Belgium put up a show for TRANSPOESIE in several Brussels' metro stations to draw the attention of the public to the poster display.  To emphasise the focus on languages and the diversity of Europe the group created and danced to a medley of six songs in six european languages. International media was also present and recorded the event. More pictures and videos will be available soon.

diu Komartin (RO), Lieke Marsman (NL), Clara Janés (ES), Carl Norac (BE) and Radek Maly (CZ) exchanged views on their way of writing, explained where their inspiration comes from, how public space can be used for the purpose of representation and promotion and why translation can be a blessign and a curse.  The evening was moderated by Peter Vermeersch, a poet and writer himself, from the Brussels Poetry Collective.

On 27th September, the Flemish-Dutch House deBuren and the Dutch Embassy hosted the Het Liegend Konijn Debut Award Ceremony rewarding Lieke Marsman (NL) for her first work Wat ik mijzelf graag voorhoud (What I like to impress on myself). Her poem Oerknal (Big Bang), selected for the TRANSPOESIE project, was the winning entry of the competition and is now translated into the 23 official EU languages. The TRANSPOESIE poets Carl Norac (BE), Radek Malý (CZ), Morten Sondergaard (DK), Clara Janés (ES), Claudiu Komartin (RO) and Emily Ballou (UK) were invited to read Lieke’s poem in the poets' native language alongside an extract of their own works. The ceremony was held in the presence of the Flemish minister of Education Pascal Smet, the Editor-in-chief of Het Liegend Konijn Jozef Deleu, and the Director of the Flemish-Dutch House deBuren Dorian van der Brempt.  Watch the video of the evening in our news and events section.